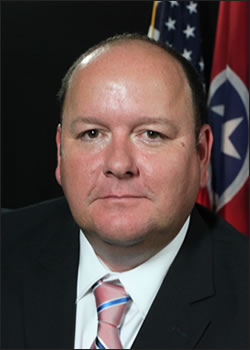 Gen. Brent Cooper began his career in law enforcement in 1992 as a Probation Officer with the Tennessee Department of Corrections. He worked in both Knox County and later Rutherford County. From there, Gen. Cooper went on to work for the Davidson County Community Corrections Program as a case officer and TOMIS coordinator.

Gen. Cooper's first experience with the prosecution side of law enforcement was as an intern with the Davidson County District Attorney's Office. Later that same year, in October of 2000, he joined the 22nd District as an Assistant District Attorney. As an ADA, his primary responsibility was to prosecute felony drug crimes. However, his experience also included dozens of jury trials for other serious offenses including rape, robbery and first degree murder. Fourteen years later, on August 7th, Gen. Cooper was elected to serve as the District Attorney General for the 22nd Judicial District.

Gen. Cooper currently resides in Summertown, TN with his wife and two daughters. He also has a step daughter who is currently attending Nashville School of Law.