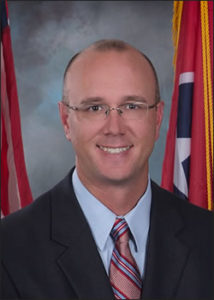 Since taking office, Gen. Effler has implemented policies that prioritize crime victim notification and support. Gen. Effler has also partnered with community organizations to improve prosecutions and public education, including working with Mothers Against Drunk Driving to combat DUI recidivism and collaborating with local school districts to educate middle and high school students on the dangers of social media and electronic communications. He also serves on the board of directors for Campbell County Children’s Center, Children’s Center of the Cumberlands and Friends of Lincoln Memorial University Duncan School of Law. Additionally, he serves as chairman for the Tennessee District Attorneys General Conference Victim/Witness Steering Committee.

Gen. Effler resides in Maynardville with his wife, Mary, who is the director of Nutrition for the Union County Public School System, their two daughters, Katy Beth, age 17, and Mia, age 13, and their two English Shepherd dogs, Josie and Lottie. The Efflers are active members of Milan Baptist Church in Maynardville.

Geographically, the 8th Judicial District is one of the largest in Tennessee. The district is dissected by Norris Lake, which touches three of the district's five counties. Travel across Norris Lake is aided by Helms Ferry, which is one of only two operating ferries in Tennessee and the only county-operated ferry.