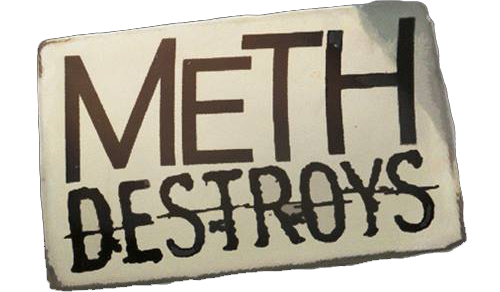 Determined to stop the destruction methamphetamine was having on their local communities, the DAs started “Meth-is-Death” – a public awareness campaign highlighting the dangers of the drug. Shortly after the program’s 2003 inception, Tennessee seized more meth labs than any other state in the nation aside from Missouri.

In response to these record-breaking reports, Tennessee Gov. Phil Bredesen formed the Task Force on Methamphetamine Abuse, which recommended several steps, including a major educational initiative about the dangers of meth. In recognition of TNDAGC’s established commitment to this issue, the Conference was selected by the Task Force to expand their ongoing “Meth-is-Death” program to Meth Destroys – a statewide education and awareness campaign designed to educate Tennesseans of all ages about the dangers of meth use and production.

How we reached our communities

One of the key messages the campaign stressed was that meth is different from other drugs – it has horrific physical effects, poses serious environmental concerns and is a severe threat to our communities. Our primary mission was ensuring that this message reached Tennesseans of all ages, in every community. We accomplished this in several ways: 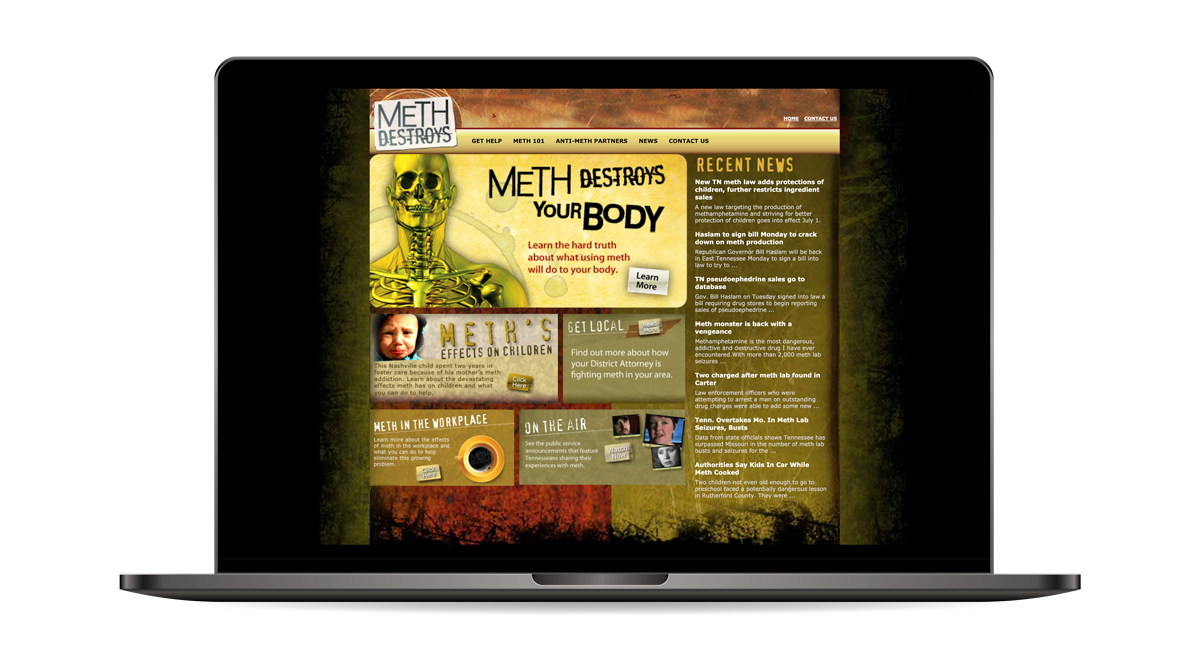 This site was the foundation of our work as it included general information about meth, resources for how to get help, information on how to report suspected meth production, downloadable materials and a variety of other resources.

A committee of over 2,000 Tennesseans committed to both protecting their local communities from this deadly drug and strategizing on how to further the message of the Meth Destroys campaign.

Produced brochures, DVDs, bumper stickers, window decals, posters, symptom sheets and teacher’s guides.
Put up billboards in every district. Released radio and TV public service announcements that were played over 14,000 times by more than 50 media outlets.
Partnered with local organizations and businesses to distribute information to their members and employees via newsletters and email blasts. 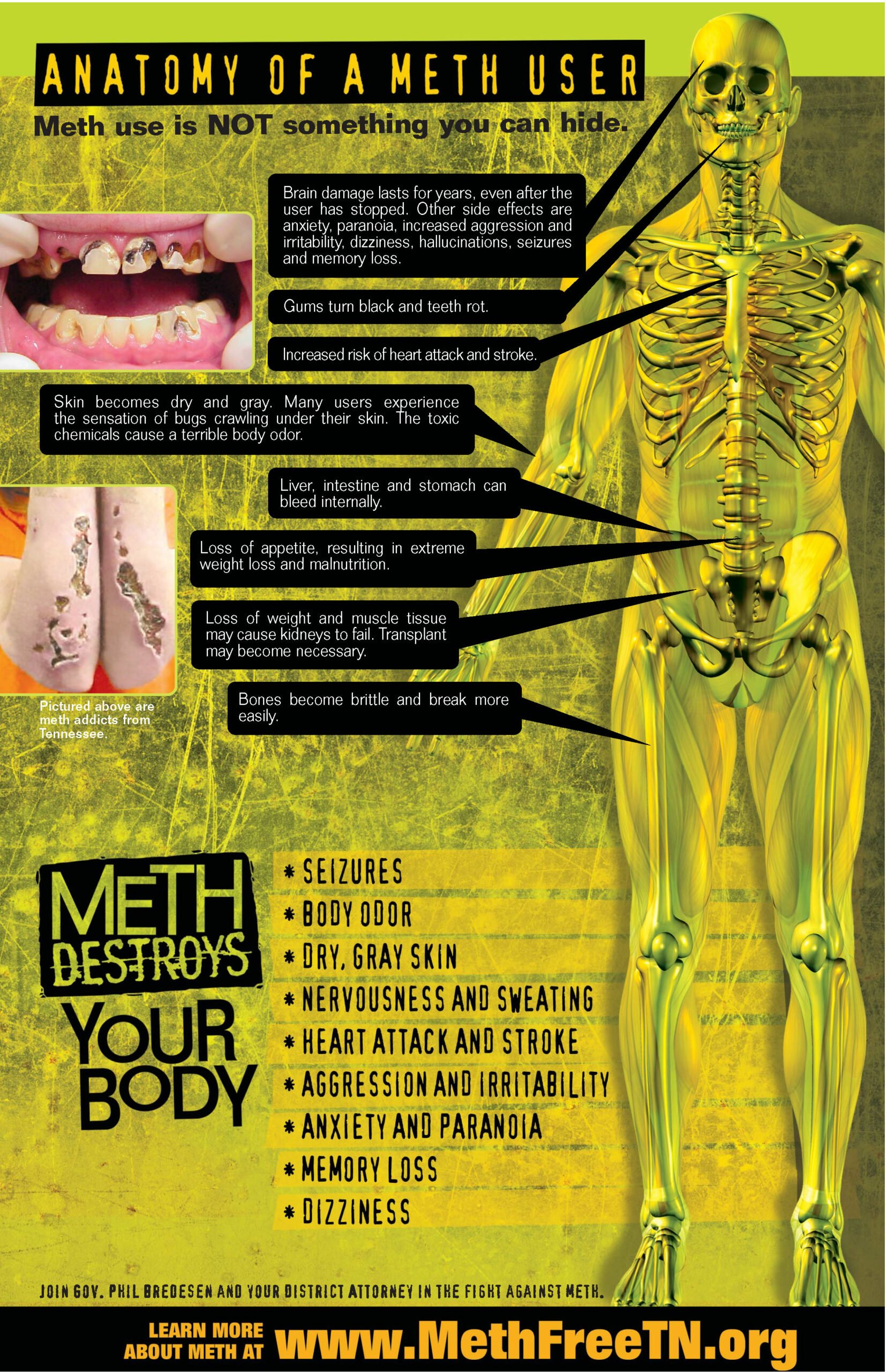 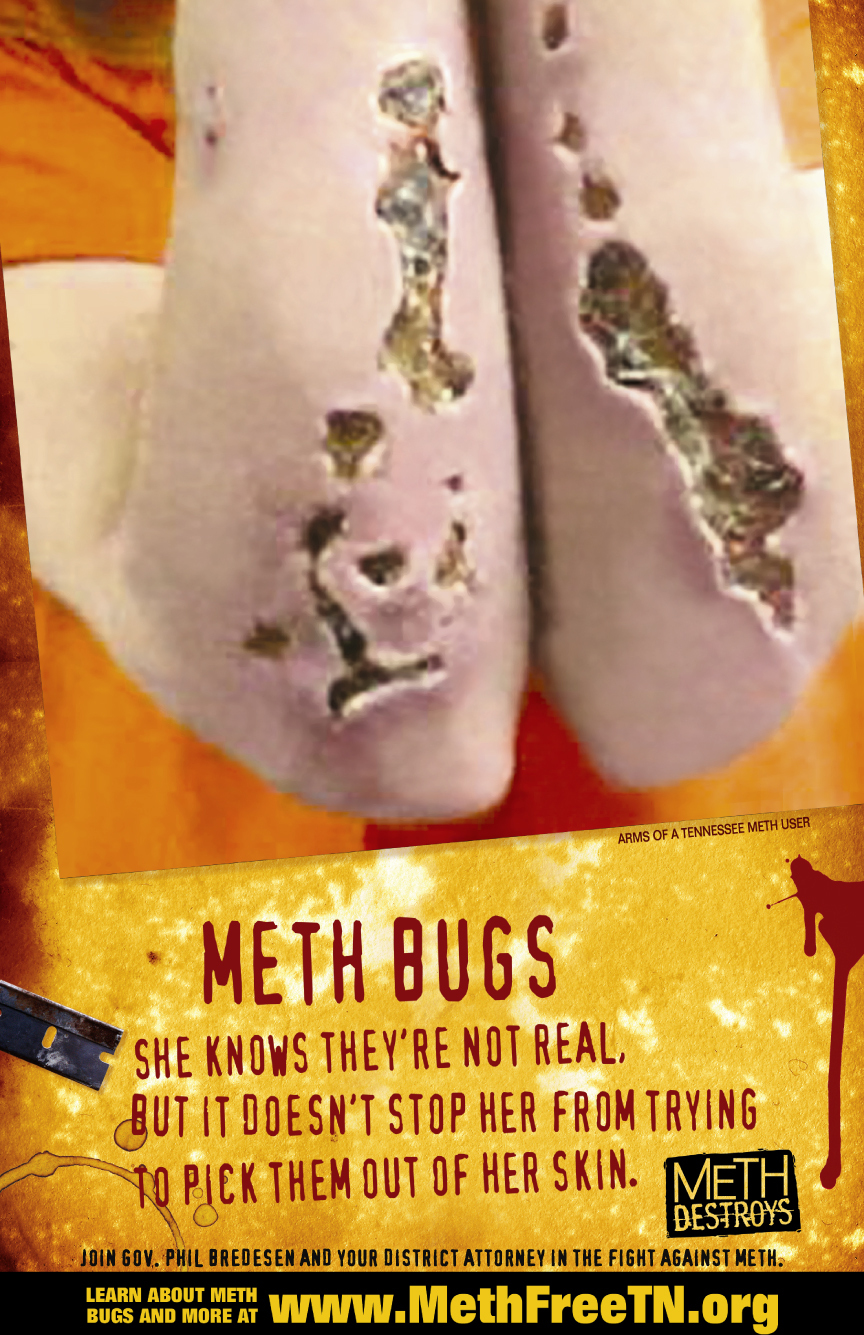 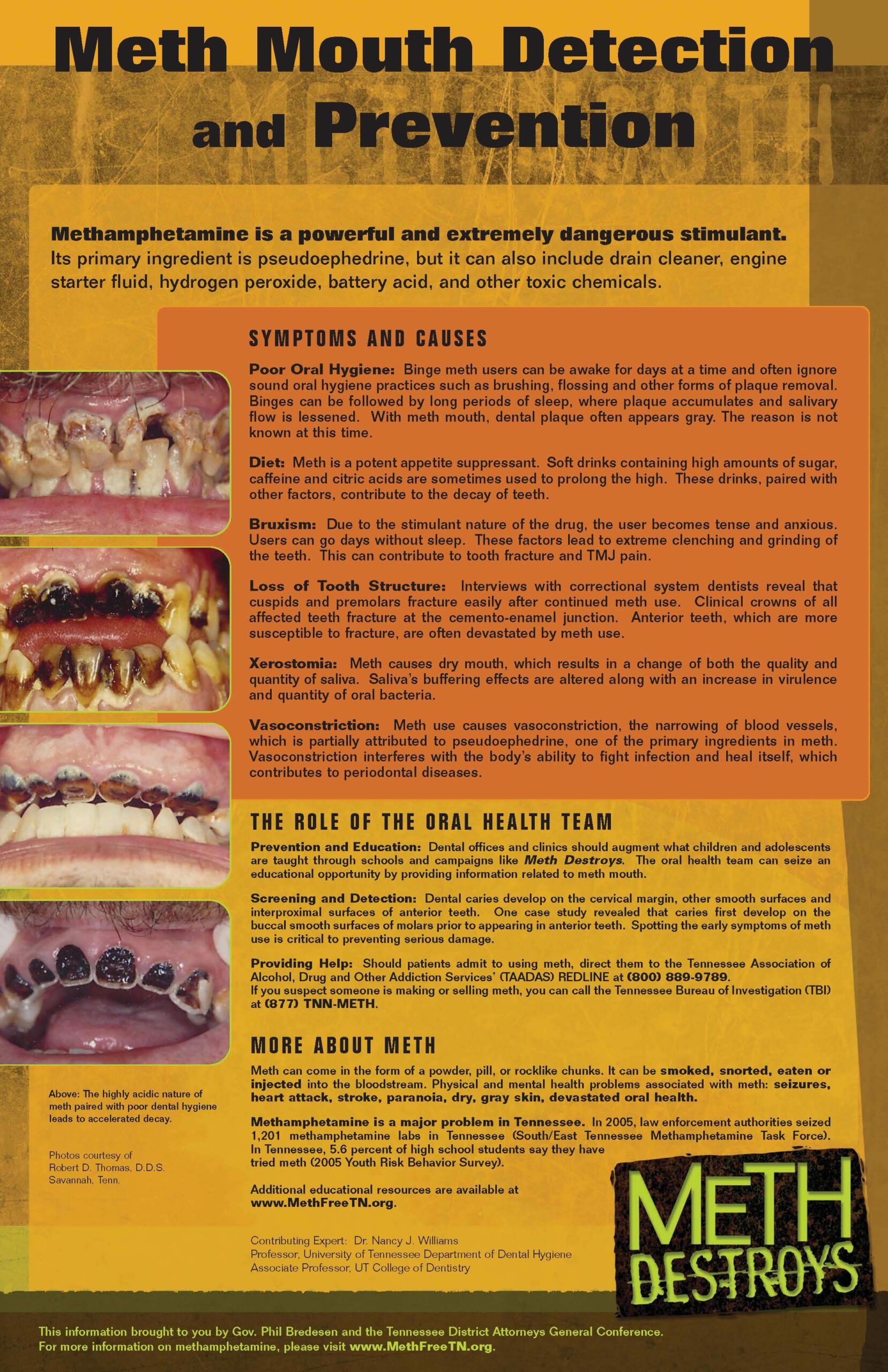 The results of this campaign speak for themselves. Meth Destroys, in partnership with new Tennessee legislation that put pseudoephedrine behind the counter, helped bring the number of meth lab seizures down by nearly 50% by the end of 2006. Further, with nearly 10 million media impressions and 4 million website visits, this campaign successfully reached communities far beyond our targeted audience of local Tennesseans.

A new law targeting the production of methamphetamine and striving for better protection of children goes into effect July 1.

Cooking meth in front of a child will be aggravated child endangerment under the I Hate Meth Act signed by Gov. Bill Haslam on Monday in Greeneville, Tenn.

With more than 2,000 meth labs shut down statewide last year and 484 children removed from homes in meth-related incidents, the governor wanted to make an impact.

“The numbers in 2010 were record-breaking,” said the governor’s spokeswoman, YvetteMartinez. “There was concern, and it was time for us to take action.”

The new law won’t allow pharmacies to sell to a person more than 3.6 grams of pseudoephedrine per day or more than 9 grams per 30-day period, unless the person has a valid prescription.

Pseudoephedrine is the common component in cold, sinus and allergy pills. It’s also a key ingredient in making meth, a highly addictive stimulant, the illegal drug of choice in the region.

“Most consumers don’t buy an entire month’s worth of allergy (pills) in one day,” Duncan said. “And your regular consumer doesn’t use nine grams in one month, trust me.”

However, there is a provision in the measure that states a pharmacist may decline the sale if it isn’t for a legitimate medical purpose.

The measure also has pharmacies linking up with law enforcement starting in January.

Pharmacies have to log information that has to be sent at least every 24 hours to the Tennessee Meth Information System database operated by law enforcement. The pharmacies will use a program at no cost to them.

Starting in January, pharmacies must have a mechanism to stop a sale if someone goes over the purchasing limit, or if someone is on the meth offender registry.

The law is the latest step in the state’s evolution toward combating the meth problem.

The state took ephedrine and pseudoephedrine, which were available over-the-counter, off the shelves to be sold only in pharmacies in 2005. Consumers had to show a photo ID and give their name and address to the pharmacist. That practice continues.

While police chiefs and sheriffs have pushed for making pseudoephedrine prescription-only, their state organizations lauded the new law and will examine the results 12 to 24 months after the law takes effect.

State Sen. Mae Beavers, R-Mt. Juliet, a sponsor of the law, pushed for the legislation to protect children who are exposed to the toxic substances when the drug is made.

Legislation in the General Assembly is a good step toward ridding Tennessee of its standing as the nation's No. 1 producer.

Methamphetamine is the most dangerous, addictive and destructive drug I have ever encountered.

With more than 2,000 meth lab seizures in 2010, Tennessee now has the sad distinction of leading the nation in meth production, overtaking Missouri for that disgraceful title.

Last year, 484 minor children in Tennessee were removed and placed in state custody as a result of being exposed to meth. More than one-third of all burn victims admitted to the Vanderbilt University Medical Center Burn Unit receive treatment as a result of meth lab explosions and burns, which drives up public health costs.

Local sheriffs and police departments now have to do more with less to respond to, contain and clean up the environmental hazard produced by meth labs now that the federal government has eliminated funding to states because of recent budget cuts.

Meth use creates other crimes, such as domestic violence and child abuse, burglary, theft and other property offenses.

According to Tennessee Commissioner of Safety Bill Gibbons, the meth epidemic has a total annual cost of more than $1.6 billion to the taxpayers of this great state.

Those of us in the criminal justice system have now learned that, despite our best efforts, we cannot just arrest, prosecute and incarcerate our way out of this enormous public safety problem that plagues Tennessee.

We must be proactive as well as reactive in our approach, and we must do something now to kill the meth monster. We simply do not have the luxury to wait until there are more studies, more resources or more victims.

In 2004, we slowed down meth production in Tennessee by moving certain cold medicines that contain the primary ingredient in meth -- pseudoephedrine -- behind the counter, and requiring a signature log for all purchases.

At the same time, Tennessee's district attorneys general engaged in statewide public education and awareness campaigns that warned of the dangers of meth.

But meth has now come back with a vengeance in a new form, produced in smaller "one-pot" batches that are more mobile, supplied by "smurfers," who circumvent the pharmacy log system by hopping from store to store to accumulate cold medicine for meth cooks, like their little blue cartoon namesakes.

Senate Bill 1265/House Bill 1051 represents a comprehensive approach by the Haslam administration to enact various provisions to combat meth manufacture, and it has solid bipartisan support as it moves through the General Assembly. Some of the key provisions of the bill include:

Broadening the criminal offense of aggravated child endangerment to include manufacturing meth in the presence of a minor child.

Providing for mandatory minimum fines against persons convicted of promoting meth manufacture by "smurfing" pseudoephedrine, with the fines to be used by local law enforcement for meth lab cleanup.

Requiring pharmacists to personally counsel a potential purchaser of pseudoephedrine and to decline the sale if not for a legitimate medical condition.

Requiring all Tennessee pharmacies to use the National Precursor Log Exchange (NPLEx) computer data system to provide for real-time electronic tracking of pseudoephedrine purchases, with a stop sale mechanism for persons attempting to purchase more than the allowable daily or monthly limit, and to allow law enforcement access to the data for enhanced criminal investigative and interdiction purposes.

This legislation is a good step forward in the fight against meth in Tennessee, and the Public Safety Coalition hopes to see real and immediate results from its enactment in reducing the number of meth labs across Tennessee.

However, if the meth epidemic continues to destroy lives, families and communities across our state at its current rate, we may have to consider the ultimate proactive measure of making cold medicines containing pseudoephedrine available by prescription only.

In states like Oregon and Mississippi, where this drastic measure was recently enacted, meth lab numbers have immediately and dramatically decreased.

Tennessee's sheriffs, chiefs of police and district attorneys support the proposals outlined in Senate Bill 1265/House Bill 1051, and stand ready to implement the bills' requirements while continuing to develop further ideas and measures to solve this monumental problem.

We hope the General Assembly and Gov. Bill Haslam will join us. The time is now.

Mike Dunavant is district attorney general for the 25th Judicial District and chairman of the Tennessee Public Safety Coalition.

Two children not even old enough to go to preschool faced a potentially dangerous lesson in Rutherford County. They were playing in their parents' car while methamphetamine was being cooked on the back seat, according to the Sheriff's Department.

Rutherford County narcotics detectives had gotten a tip that meth was being manufactured inside a car at a West Jefferson Pike home in Walter Hill. The moment they saw two small girls playing in and around the vehicle, they had enough, so they made their move.

"That's when he stuck his hands in the air and said, 'You've got me. I'm busted,'" said Sheriff Robert Arnold.

"We are seeing a rise in these mobile meth labs, what we call shake-and-bake," Arnold said.

Authorities said the couple was using the shake-and-bake method -- a quick and easy way to make meth for personal use.

"(The method) is made up of a Coke bottle, several Coke bottles, and lithium batteries and other ingredient," said Arnold.

"The chemicals that come off of it, (there is) the potential for an explosion," said Arnold.

Authorities said the 2- and 3-year-old girls had direct exposure to methamphetamine inside the car. They were taken to a hospital to be decontaminated before being taking into the Department of Children's Services' custody. The girls are now staying with relatives.

The sheriff said the shake-and-bake method would have yielded about 4 grams of methamphetamine, a street value of $300-$500. But it cost taxpayers thousands of dollars more to clean up the mobile meth lab.

"The price tag to clean this up, going to the taxpayers, is probably tens of thousands of dollars," said Arnold.

Smith and Rucker are facing reckless endangerment and meth charges and remain in jail.